Word of the day: caltrops

Limacodids are the slug caterpillars… aptly named because they look like slimy colorful slugs. They have reduced legs and prolegs, and they appear to “ooze” along leaves. They are also adorned with a variety of sharp spines.

Hint, these are unpleasant to get imbedded in your skin. I ran into Euclea obliqua, one of the most striking species here in the northeast, and my hand was swollen and itchy for days.

This is my plush interpretation of the creature, with pom poms instead of clusters of spines.

Posted in Word of the day

Rascal says “Ok, we’re all packed and ready to go!”

I’m moving to a new apartment this weekend. It is closer to campus, closer to my boyfriend and most of my friends, and is a stone’s throw away from a Mexican restaurant. Of course, that is not very good for my stomach (I’ve been eating paleo for about 9 months now), but a margarita now and then won’t hurt too much.

I am excited because it is fully carpeted, which will give Rascal more room to run around. Hopefully in the next few weeks I’ll also find time to do everything else that needs to be done in my life. Sewing machine is in a repair shop, but I should be back in sewing action once I’m moved in. Caterpillars in the lab are growing fast. I’m starting to seriously black-light for female moths. And maybe, eventually sometime in my life I will get something published. Woo!

Word of the day: Synanthropic

Synanthropic, associated with and living with man, in his dwellings, other building, or produce.

This word  refers to non-domesticated creatures such cockroaches, house flies, larder beetles, etc… things that are cosmopolitan pests, well adapted to living alongside humans in their homes and food storage.

I guess you could say the caterpillars we rear in the lab are synanthropic against their will.

Posted in Word of the day 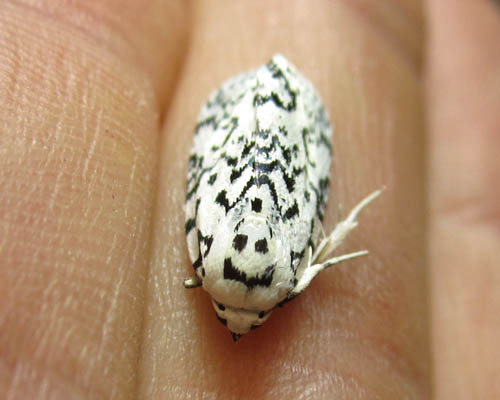 Thank you to the Connecticut Entomological Society for asking me to speak at their meeting last week, it was a lot of fun! I always get inspired when I talk about my work and get to show off pictures of my caterpillars. I adjusted my talk a lot from the last time I gave it, and added more fun stories. I hope everyone enjoyed it.

I would also like to thank all of my lab members (fan club?) for staying late on a Friday night to see my talk. Of course, they were tempted with beer and pool at the bar after the talk, but still! And a thank you to my crossfit coach who came with her friend, and got to learn a bit more about what I do.

Things have been very busy around here, I have started getting eggs and caterpillars! I have a lot of material to talk about, but I will be away for the weekend (going to watch the Crossfit Northeast Regional competition), so I will have plenty of posts to write up next week.

I currently have a luna moth (Actias luna) clinging to my ceiling… it was put there by my labmate Louis (can’t call him a student anymore, he graduated!) this morning and I didn’t notice until it was pointed out to me just now. Feeling a little silly.

I had nearly forgotten I had agreed to give a presentation for the Connecticut Entomological Society this month… turns out it’s this Friday! Good thing I already have the presentation written (it’s the same one I gave for our grad seminar in March).

If you are in the UConn area and would like to stop by, the meetings are open to the public. You can find the website here.

Word of the day: Lapidicolous

This word made me think of being a kid (and, well, up through to the present day), flipping rocks and looking for insects.

The deepest rocks usually only have worms underneath, but sometimes there are centipedes, millipedes, sowbugs, diplurans, beetle grubs… you just never know until you look. Maybe a salamander or a snake!

I’m a pain in the butt to go on walks with. While my family wants to talk and enjoy the scenery, I want to stop every couple of minutes to flip rocks and logs. Luckily I inherited this compulsion from my father, so he usually helps me.

Posted in Invertebrates, Word of the day

Entomologists know how to party

Our lab had an end-of-the-semester party last night. I came prepared with a kill jar, headlamp, and extra vials just in case. They weren’t needed, but I did catch a moth out by the porch light!

We even got a surprise call from our advisor, who is currently traveling through the southwest on sabbatical. It was a lot of fun to have most of the gang together, especially since many of them are graduating this year. Can’t some of them fail on purpose so they can hang around the lab longer? At lease we’re keeping a few for caterpillar rearing and other projects this summer!

We all survived the night, but unfortunately most of us still have some work to get through before we can truly celebrate the end of the school year. I have a take home final exam for molecular systematics that is going to take every ounce of energy and will power I have this weekend to complete. In fact, I should be working on it right now…

Word of the day: Multisetiferous

Setae are sclerotized hairlike projections of the cuticle. People often use the words “setae” and “hairs” interchangeably. Caterpillars have two types of setae: primary and secondary. The primary setae are mostly homologous (shared) across lepidopteran families. Each setae is named with a letter and number related to its position on the body. For example D1 is dorsal setae #1. Any differences in the number or arrangement of primary setae can be useful in diagnosing the family, genus, or species of a caterpillar. Secondary setae are only present in a few groups, the ones which tend to be exceptionally hairy. Thus, a wooly bear would be deemed multisetiferous.

Some of my Acronicta species are multisetiferous, like this fuzzy Acronicta americana. Just look at those tufts! 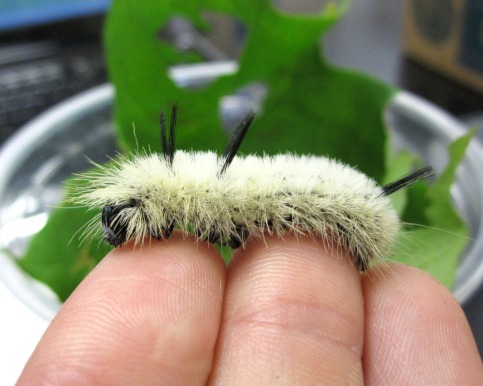 Word of the day: Exuviate

Watch out, that caterpillar is about to exuviate!
A variation of the word is exuviation, another word for ecdysis.

Apparently there are a lot of ways to describe the fact that immature insects go through molts in order to grow.
The resulting cast-off skins are called exuviae.
There are also related exuvial droplets and fluid to aid in the molting process, exuvial glands, and exuvial space (the space between the new and old skins during molting).

I dug through my photos and found this cutie, Acronicta afflicta, next to his exuviae. Most caterpillars build a molting mat out of silk, produced by silk glands on their head, that they can grab onto. They dig their little crochet hooks (found on the prolegs) into the silk and use that grip as leverage to get out of their old skin. If you disturb them during this process you may accidentally rip them apart (they have a strong grip!) or otherwise disrupt the molting process. This gets to be tricky when we are rearing lots of caterpillars and need to transfer them to new foliage, so we often cut out the small piece of leaf they are on and transfer them that way.