Sawflies, suborder Symphyta, are in the order Hymentoptera alongside bees, wasps, and ants. Their larvae are remarkably caterpillar-like, sometimes confounding entomologists until the larvae are observed up close.

For some reason, the eyespots creep me out. I keep thinking that it should make them even more cartoonish and adorable, but I just cannot get on board with loving sawfly larvae. What do you think? Is this guy creepy or cute? 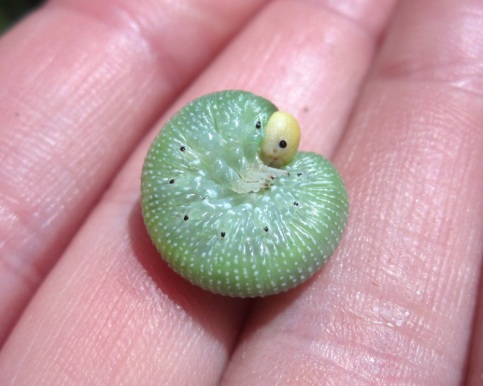 Sawfly larvae can be gregarious, and give themselves away with characteristic resting poses. If you see a bunch of caterpillars along a leaf edge waving their rear ends in the air, you are looking at some sawfly larvae. They also tend to have a slimy looking sheen to them.

Oh, and did I mention some species spit?

They spit. At least this one does, in the family Cimbicidae. Many sawfly larvae simply regurgitate their nastiness, but these have the audacity to express fluid in a stream from glands above their spiracles.

Interestingly, in some parts of the world sawfly larvae are called “spitfires”, even though they do not spit forcibly – instead regurgitating fluid or everting it from glands. Only some species in Cimbicidae can actually hit you in the face from a tree branch a foot away (which the one in the video did, before I started filming).