Green and orange and purple

Here are some more fun photos of Acronicta lepetita from Texas. Some of them turn orange during their final instar, some stay green, some even turn purple-ish. Luckily this species is quite sedentary, so it is relatively easy to photograph. This first shot is one of my favorites: 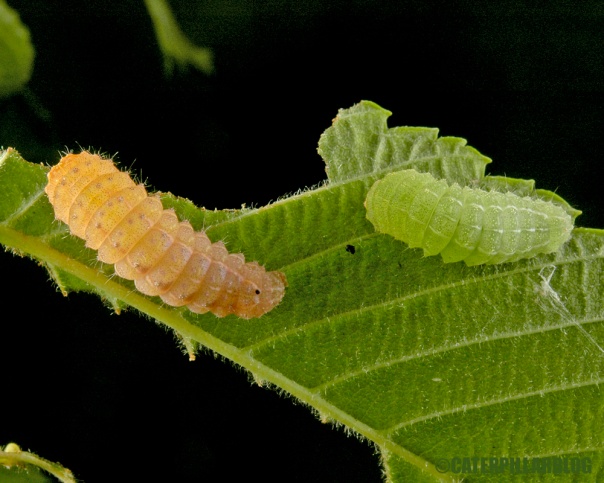 This one was not interested in being a model, it just wanted to continue nibbling the leaf edge.

There are caterpillars called “slug caterpillars” due to their, well, slug-like appearance. They are the Limacodidae, and they are some of the most beautiful and bizarre caterpillars out there.

Not to be outdone, there are a few species in the genus I’m studying, Acronicta, which resemble the infamous slug caterpillars. Blobby green things that hide their heads while at rest.

If slugs were green and had little spikes all over.

These caterpillars were raised from eggs laid by a few females I captured in Boerne, Texas. I am uncertain whether they are Acronicta vinnula (common throughout the eastern US) or Acronicta lepetita (native to southern Texas, and so closely resembles A. vinnula that I am unsure how to tell them apart). As far as I can tell, the caterpillars are identical to the A. vinnula I have raised in the past.

It appears that no-one has raised A. lepetita before. Someone please correct me if I am wrong.

I like to imagine this is the caterpillar’s “lion roar”.

The most information I can find is that “the larvae feed on various plants”. Thanks Wikipedia, that’s quite helpful.

What might be more helpful is a look at the adult. Here is one of the mothers.

I’ll throw this one out to you again. What do you think?